Your price
£12.50
Easy Moderate Very Hard
Distance is 21 km (13 miles); total ascent is 600m; terrain is undulating with some short ascents and descents; surfaces are dirt, sand, grass and tarmac

I don't seem to have much success calendaring walks to coincide with seasonal displays of flowers. Blenched bluebells, droopin' lupins... I never learn. On this latest attempt, the rhododendrons planted by Charles Darwin's sister on the southern slopes of Leith Hill will form an incidental pleasure to a strenuous but steady hike along the greensand ridge which will run from coffee time at much-loved Leith Hill to lunchtime at mostly-unknown Holmbury Hill. After a lunch break looking over the landscape we'll descend to wolds and woods, one of these being Rhododendron Wood, where the blowsy blooms should make for a dazzling display if I've scheduled the walk correctly.

Coldharbour: Quite a place; stone houses perched 230 metres up on the southern slopes of Leith Hill, unlike anything else in southern England. More like Shropshire than Surrey. Remote and unsuburbanised.

Leith Hill: At 294m, the highest hill in Surrey and the second highest in the southeast. The National Trust reports: '...from the tower...you can see sweeping views towards London in the North and the English Channel in the South. The top of the tower is the highest point in South-East England...Leith Hill is within an Area of Outstanding Natural Beauty (AONB) and is home to abundant wildlife.' The gothick-style tower was built in 1765-6 to raise the height of the hill above 1000 feet. Thirteen counties may be seen from the top on a clear day, it is claimed.

Holmbury Hill: 261 metres above sea level and the site of an Iron Age hillfort. It sits along the undulating Greensand Ridge. The hillfort is early 1st century BC, possibly built by the Belgic tribes of Celts to defend trade routes across the Weald. The ramparts make good use of the natural slope of the site.

Rhododendron Wood, Leith Hill: The National Trust reports: 'Created in the late 1800s by Caroline Wedgwood of the illustrious pottery family...A keen plantswoman and botanist, Caroline was the eldest sister of Charles Darwin who would visit Leith Hill and walk in the woods. By planting up two fields with rhododendrons and azaleas, many of which were specimens brought back from Asia, Caroline created a beautiful entrance driveway to her home at Leith Hill Place. In 1944 the Rhododendron Wood was bequeathed to the National Trust by Caroline's grandson, the composer Ralph Vaughan Williams [who lived at Leith Hill Place].' Trees and shrubs to be seen on the tiny trail suggested by the National Trust that we'll follow include: giant redwood (Sequoiadendron giganteum); coast redwood (Sequoia sempervirens); the UK's oldest tulip tree (Liriodendron tulipifera); Rhododendron 'Winsome'; Rhododendron macabeanum; and the tree-like Rhododendron arboreum.

I love having dogs on my walks and this walk may be suitable for them in that there will be almost no farm livestock on the route, much if it is under trees in shade and it is not too long. However, it may be less suitable because there's quite a bit of climbing and a few stiles to cross and country lanes to walk along. The weather might also be very warm. Any dog off its lead must be obedient.

The route (please click on the link in red):

Heading out west from Holmwood Station along Moorhurst lane we'll reach Anstie Lane which will take us to Coldharbour by following it northwest. This will then be the edge of the open access land of Leith Hill and Coldharbour Common. Picking up the Greensand Way (GSW) heading west we'll reach Leith Hill Tower, then continue on the GSW off Leith HIll and through Pasture Wood and on to Holmbury Hill for lunch at the viewpoint. We'll then turn east and bridleways will take us past Moxley Copse and Upfolds Farm to Tanhurst and the Rhododendron Wood. A small circle around these woods will give way to us descending in a southeasterly direction to Leith Hill Place Farm, Hartshurst Farm, Buckinghill Farm and then, after turning north, Bearehurst. A route heading northeast will take us to Nob's Copse, rejoining Moorhurst Lane just after Moorhurst Farm to go back to the station. 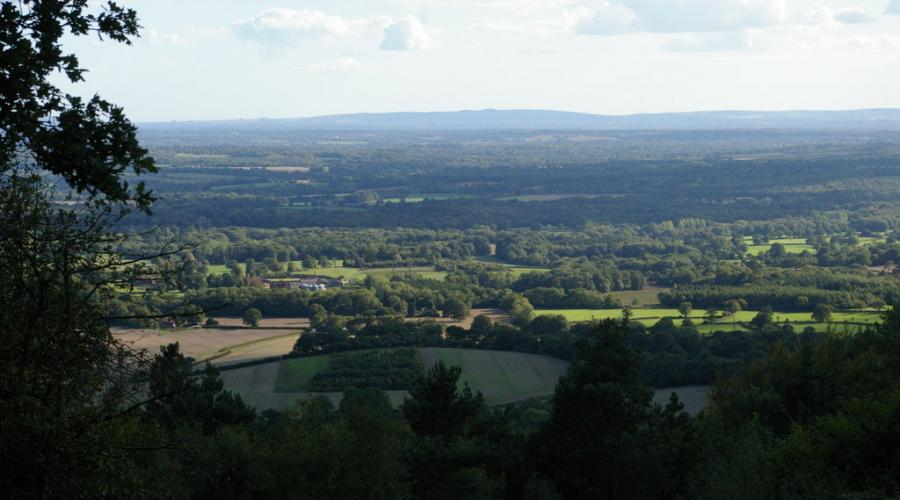 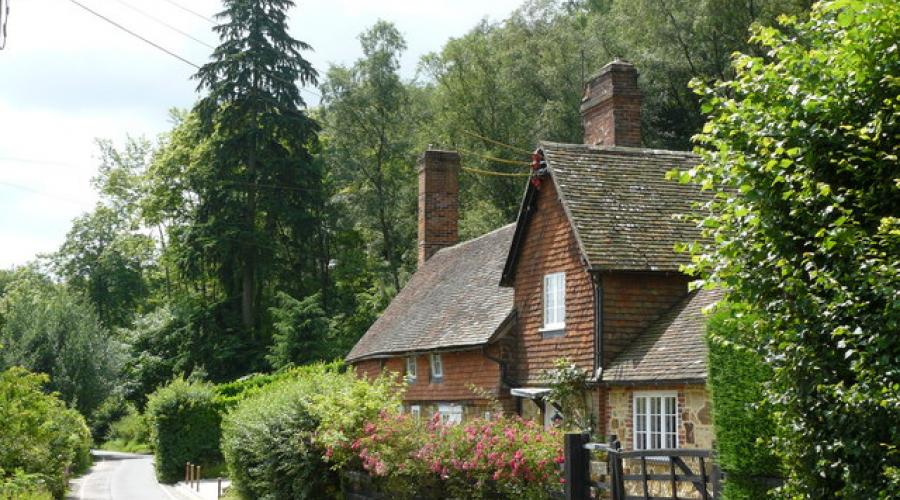 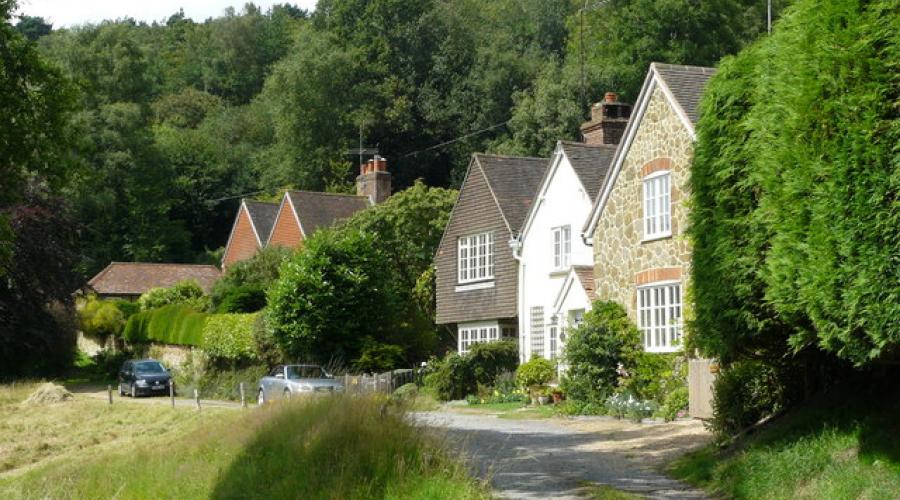 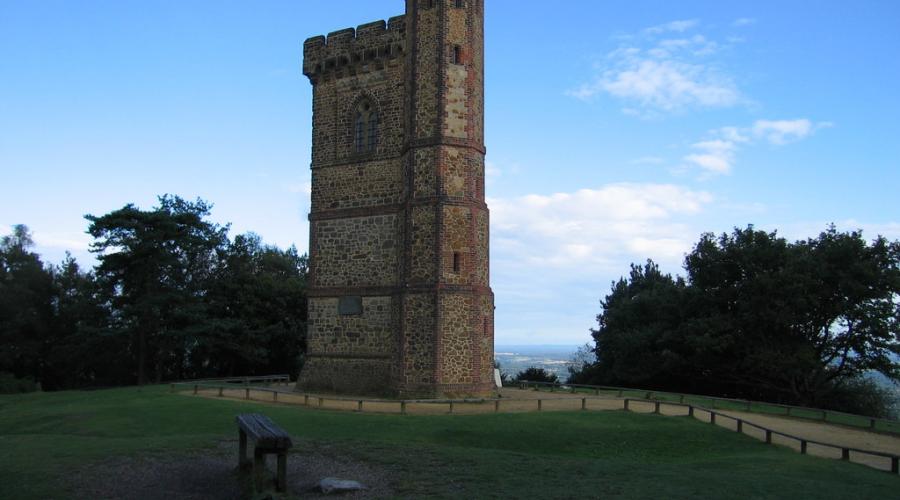 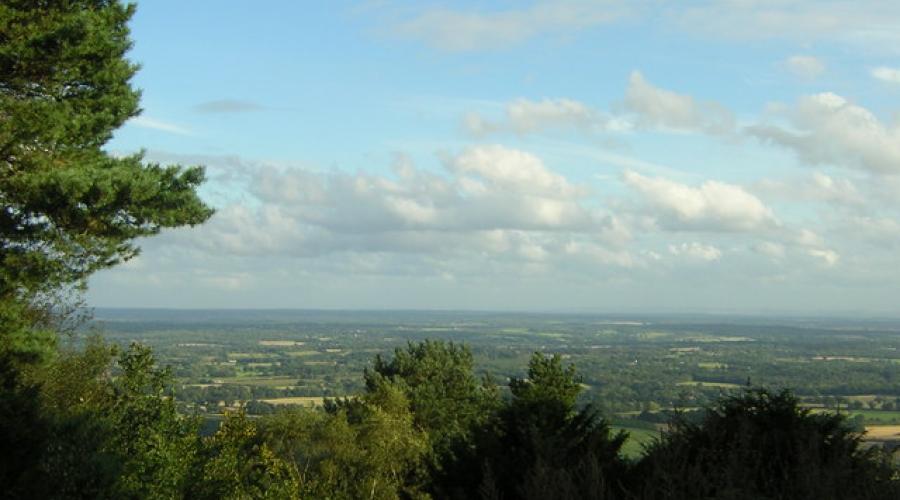 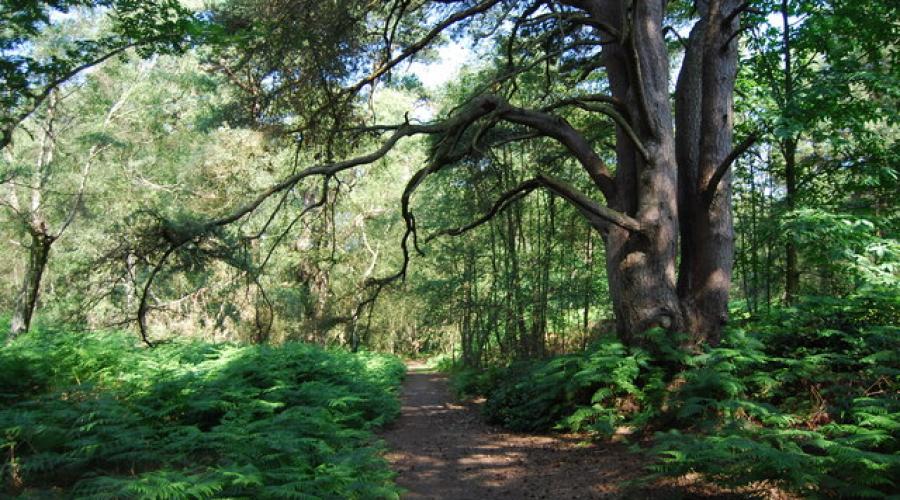 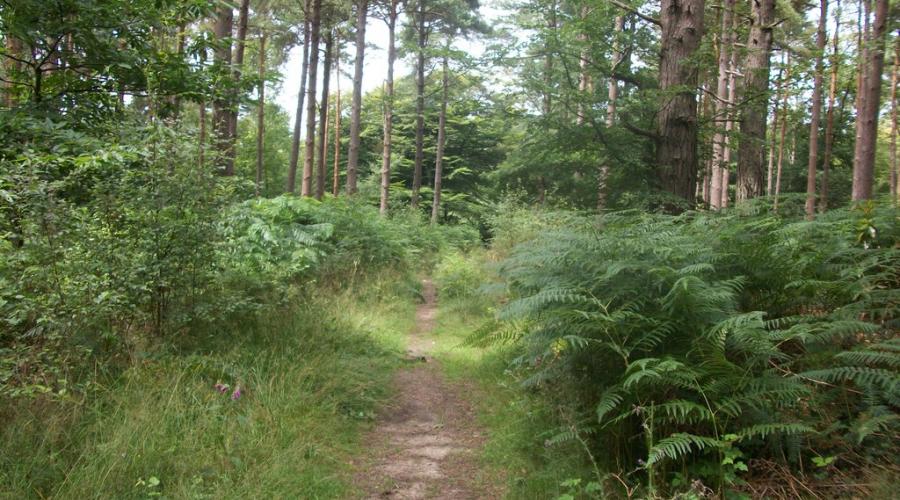 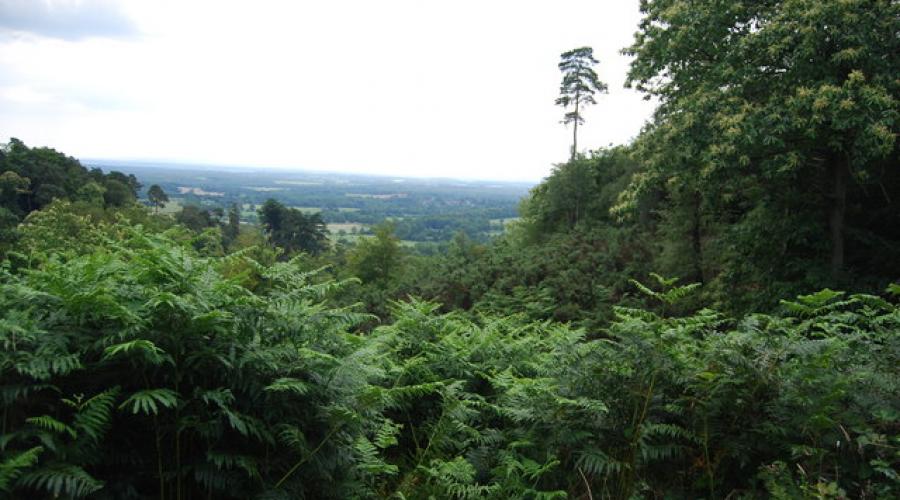 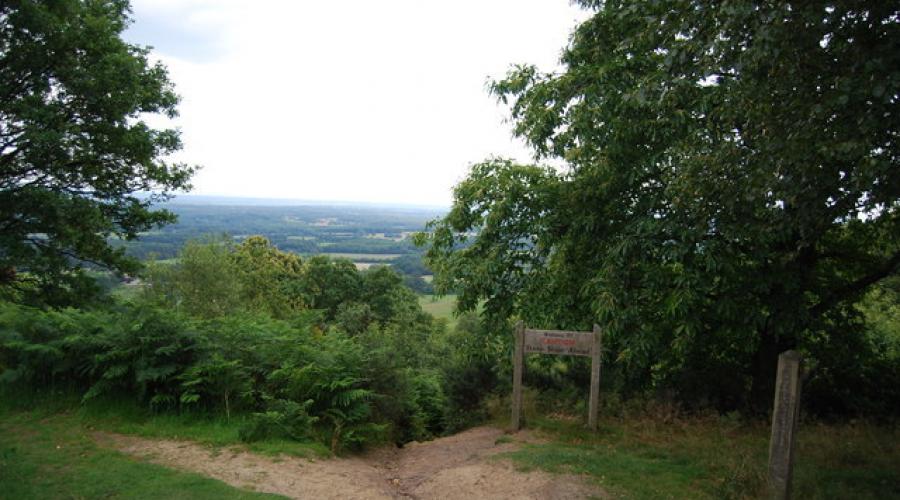 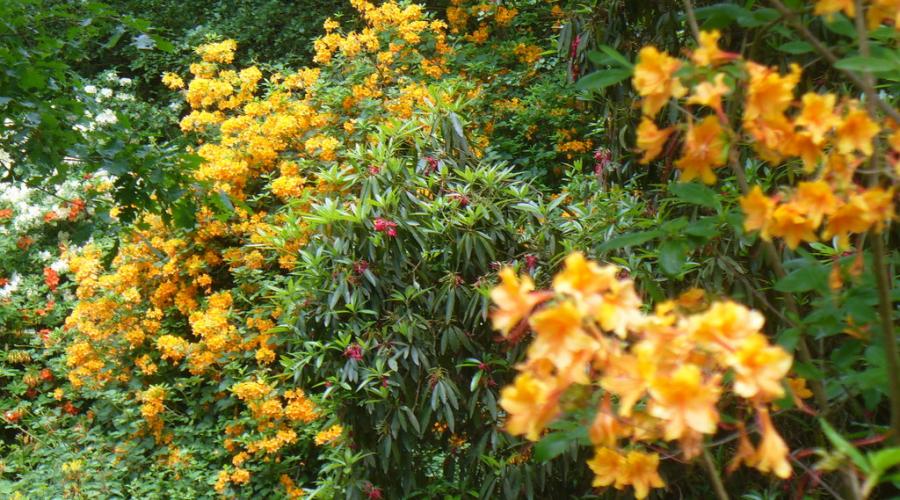 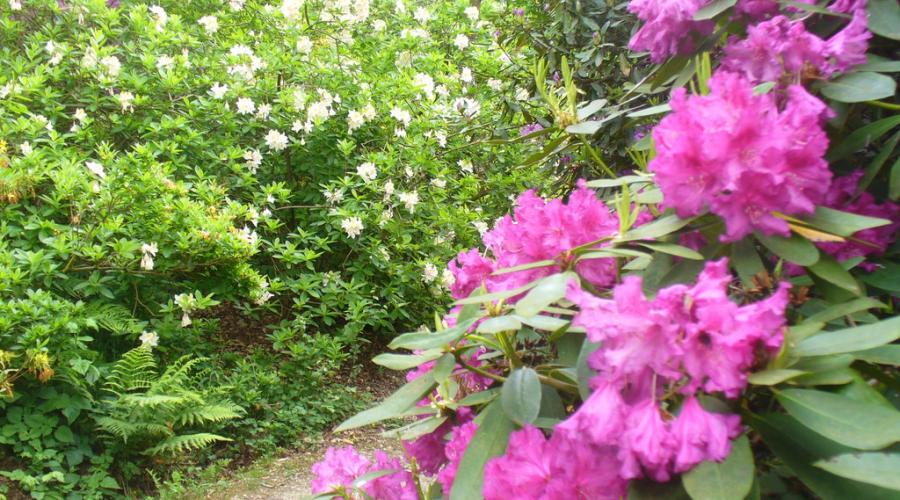 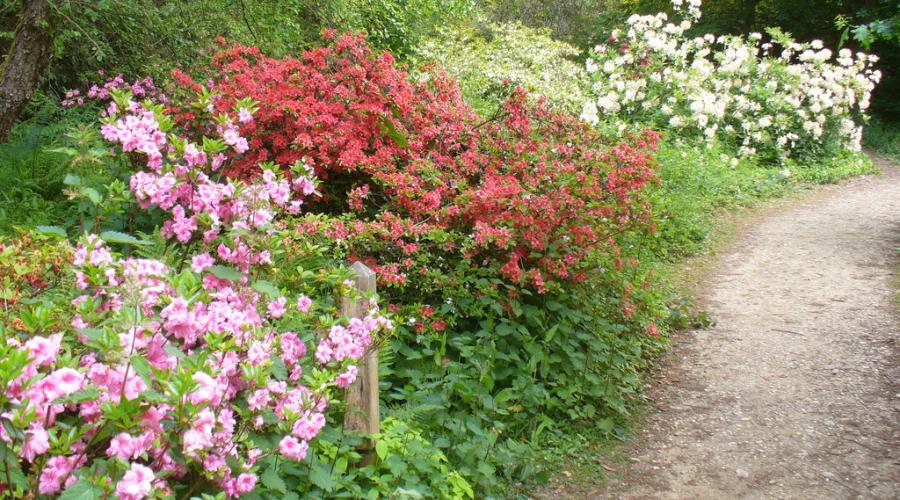 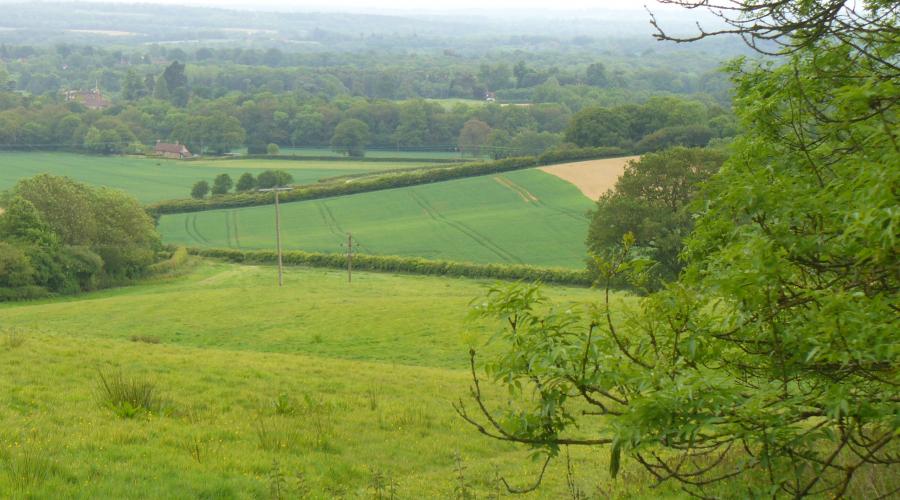 Walking boots are essential as the walk will involve rough terrain and steep ascents and descents. Wear thick socks to prevent blisters. Otherwise, just bring and wear clothing appropriate to the weather. Jeans should be avoided, though, because they become heavy, cold and chafing if wet.

Please bring a packed lunch and lots to drink. Time permitting, we could have coffee at Leith Hill Tower at about 11.30.