Novelties and Notables on the November North Downs

Your price
£12.50
Register now to book
Easy Moderate Very Hard
Distance is 20 km (12 miles); total ascent is 354 m; terrain is undulating with one gradual ascent and one steep descent; surfaces are dirt, grass and tarmac

Ridges of chalk tend to be asymmetric in cross section with one side being the dip slope which is gentle and the other being the scarp slope which is steep. The dip slope of the North Downs will be the setting for the first half of this walk where tree-lined lanes will lead us through scattered farms out of the Surrey Hills AONB to Walton Heath which has grown on a pocket of sand. At Walton-on-the-Hill itself we'll see Lloyd George's house (bombed by Emmeline Pankhurst) and have lunch. The scarp slope will be the setting for the second half of the walk where a folly, a fort, a footbridge and a cafe will attract our attention away from the superb scenery which includes a Capability Brown-designed park.

Merstham: Unexpectedly pretty for a former quarry village on the main road from London to Brighton. The stone quarried was Reigate Stone, an ironstone used for buildings that include Westminster Abbey and Windsor Castle. The old Brighton road does in fact veer away leaving as its continuation a street called Quality Street in which 'the original buildings [some C16], in firestone, brick, a little half-timber, and a little tile-hanging are tactfully welded together by the trimmings and the front gardens of the houses of c1900' (Nairn, The Buildings of England: Surrey). The road was named after JM Barrie's 1890 play of the same name, in honour of two of the actors in the play who lived at the Old Forge (the sweets were also named after the play, in 1936). North of the village is the end of the M23 which was due to extend as far as Streatham Vale to meet Ringway 2, a scheme cancelled in 1972 when the London Ringways plan was shelved. Near Merstham is the massive multi-level stack interchange of the M23 and M25. St Katherine's Church is solid, grand and C13 with a shingle spire. North of the church is a round tower which is either a C15 dovecot or a folly of 1840.

Walton-on-the-Hill: Pleasant, mostly Victorian village of flint, tile-hanging and weatherboarding. The best houses are south of St Peter's Church in which the best bits are the C15 chancel and the oldest and one the finest lead fonts in England, dating to 1150. The Manor House is 1891 but incorporates C15 walls from the old manor. Oral tradition has it that Henry VIII stayed there with Anne of Cleves. Chussex is a suave but rather dull classical house by Edwin Lutyens of 1910, but with a good Gertude Jekyll garden. Pinfold Manor was built for David Lloyd George in 1912 while Chancellor of the Exchequer. It was bombed by a group of suffagettes led by Emmeline Pankhurst in 1913 who only succeeded in damaging the servants' quarters. Lloyd George heard the explosion while playing golf with Churchill on Walton Heath. The damage was repaired apart from a large crack left as a memento.

Colley Hill: Contiguous with Reigate Hill on the North Downs scarp. Superb views across the Weald to the South Downs and to the side to Leith Hill. Quarrying activity at the foot. The Saddle Knob is a protrusion on the side and The Horseshoe a copse. Many SSSIs on the hill. The Inglis Memorial was donated to the Borough of Reigate in 1909 by Lieutenant Colonel Sir Robert William Inglis. Originally a drinking fountain for horses at the top of the original main route over Reigate Hill, now a seat with a mosaic of the solar system in the dome.

Reigate Hill: The parent hill to Colley Hill to the west, the ninth highest hill in Surrey at 235m. Reigate Fort is National Trust owned but free to enter. Built in 1898 to defend London against France of the Third Republic. The London Defence Scheme began in 1889 involving a chain of defence 72 miles long, stretching from the North Downs to Essex. Reigate Fort was a mobilisation centre, holding tools for clearing trees and digging trenches as a last line of defence. Nearby is the footbridge over the A217 designed in 1908 and built in 1910, the first reinforced concrete footbridge bridge in the country. 30m span with cast iron railings. Restored in 2012. The Grade II listing citation reads: 'This structure has technological virtuosity because of the narrowness of its beams, the openness of its structure and the achievement of a 97 foot span without interruption, which pushed the technology further than before to express the true potential of reinforced concrete.'

Gatton Park: A blocky and ugly Classical-revival house built in the early C19 for the Monson Family, then bought by the Colman family of mustard fame. After being gutted by fire it was rebuilt exactly as was in 1936. The Town Hall is a small, open Doric temple of 1765 where 'elections' (actually nominations for Gatton's rotten borough) were held. The house and park is now the Royal Alexandra and Albert School. The northern part of the 'Capability' Brown park suffers from insensitive modern dormitories, but the southern part is still handsome and being restored with overgrown vegetation being cleared to leave the specimen trees. The grounds were used for filming a Doctor Who story in 1976 (The Deadly Assassin) for the scenes of the Doctor being hunted in the Matrix (he was almost drowned, to Mary Whitehouse's consternation, in Engine Pond). St Andrew's Church is spindly and eerie gimcrack gothic of the early C19 but with a phenomenal collection of C15 and C16 stained glass, sculpture and woodwork from Germany and the Low Countries.

We will leave Merstham up Quality Street, cross the M25, then head northwest over Church Hill then west along Harps Oak Lane, a footpath, and Rectory Road to Mugswell. At Hogden Bottom we'll cross the A217 and head across Bansted Heath to Walton-on-the-Hill. After lunch at the pond, we'll loop around Walton then head southeast across Walton Heath to cross over the M25 again. We'll then pick up bridleways and finally the North Downs Way/Pilgrims' Way which will lead us mostly east back to Merstham over the crest of the hills and through Gatton Park.

I welcome dogs on my walks and this is a good walk for them although they will frequently need to go on leads on lanes and while crossing roads. Sheep and cattle grazing on the North Downs may futher limit their freedom, but there will be abundant fields and woods for them to roam free. A dog off its lead must be obedient. 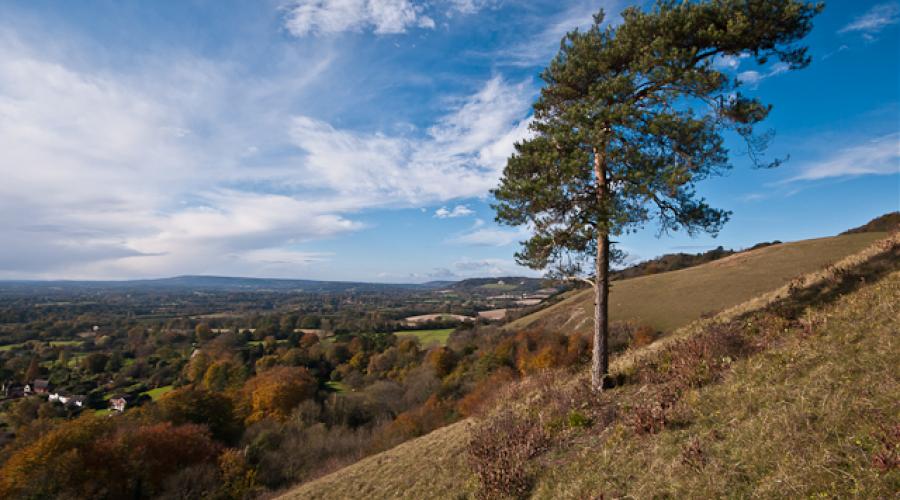 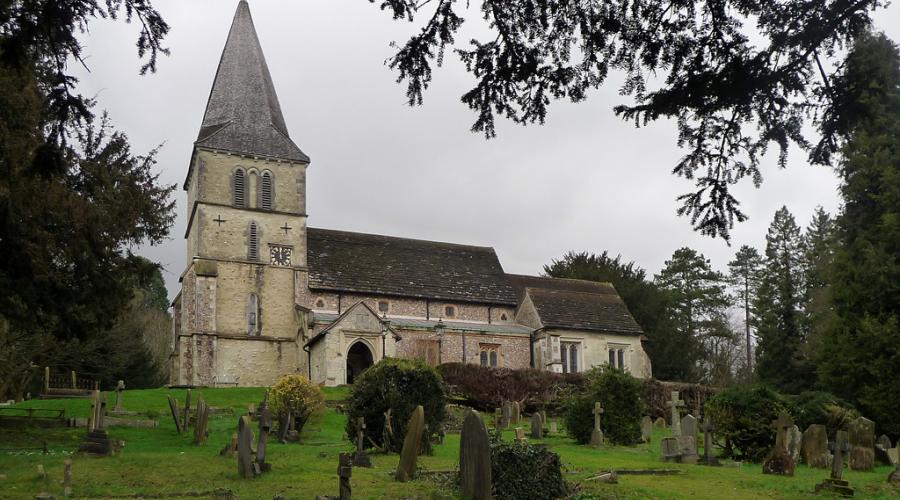 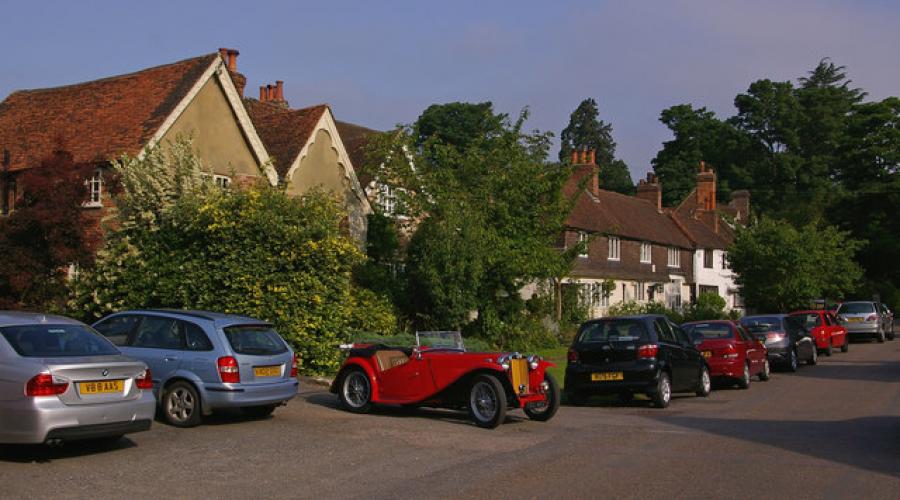 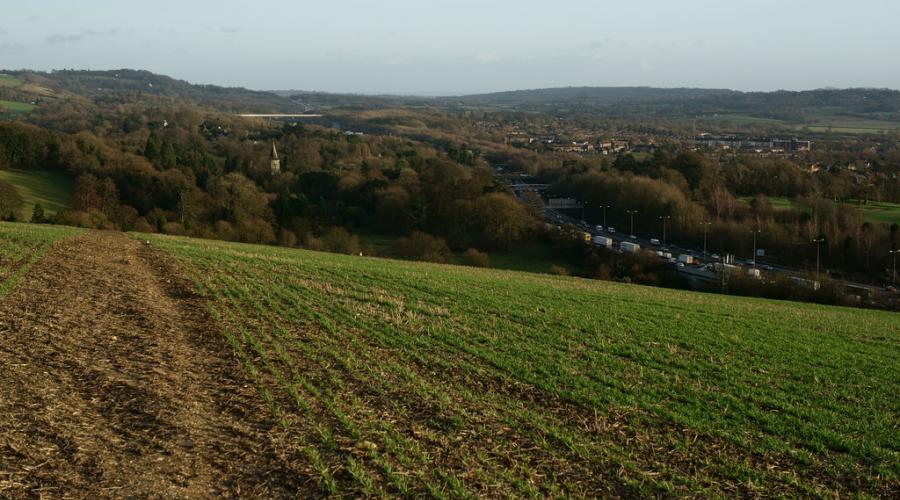 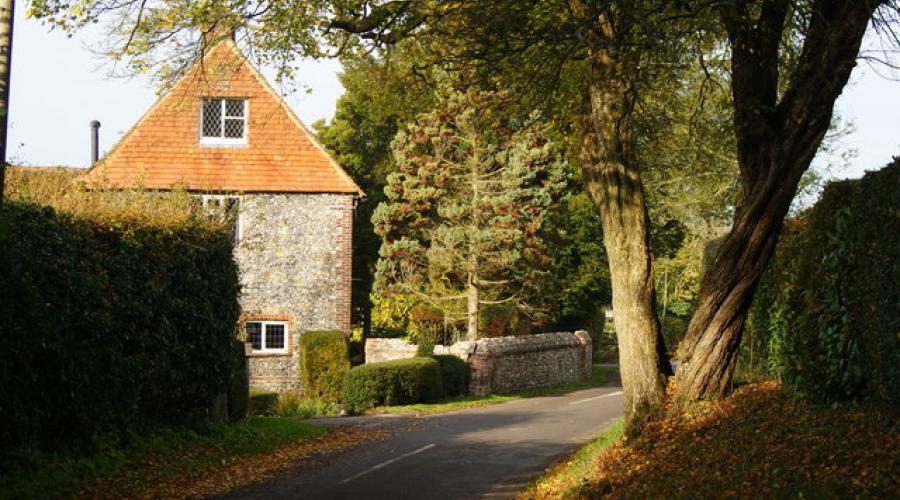 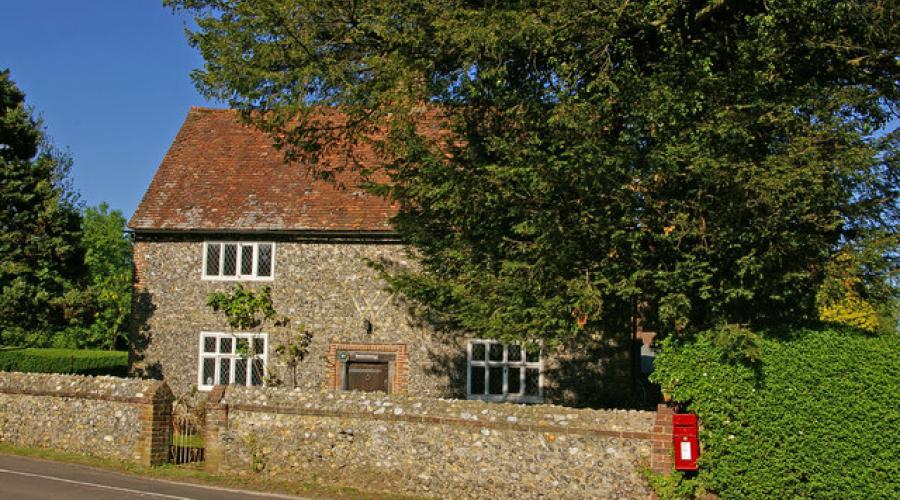 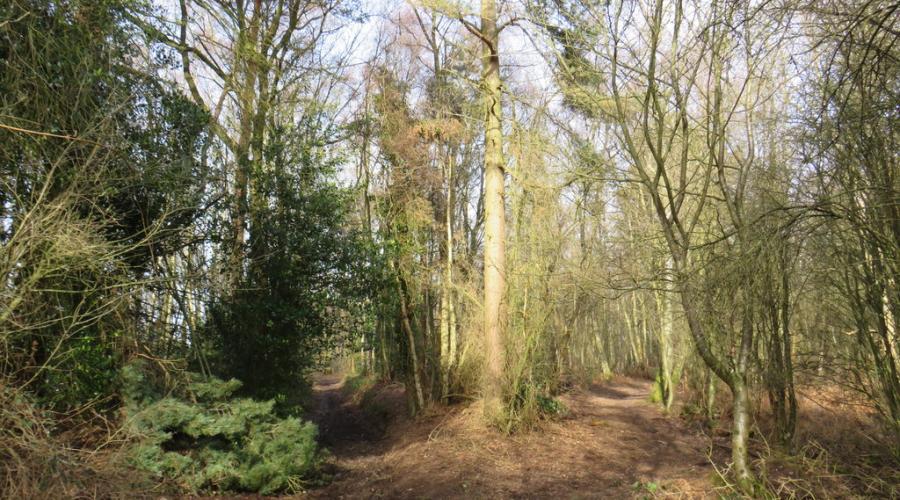 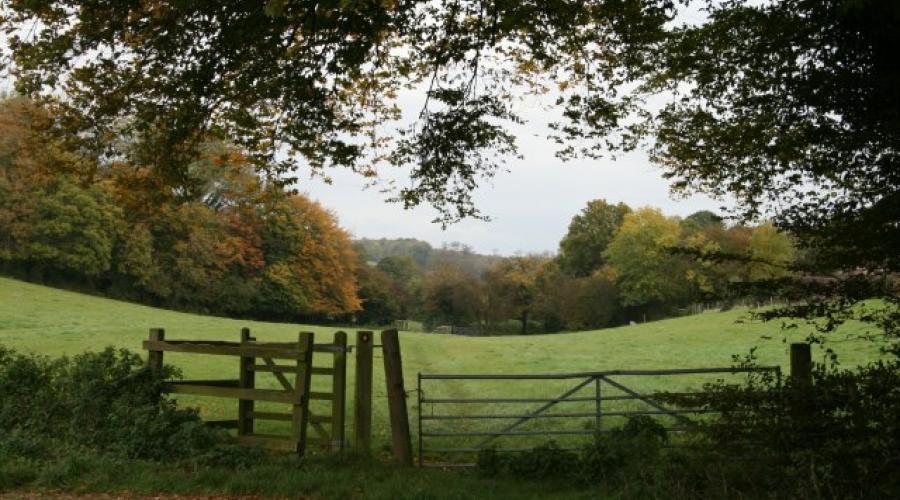 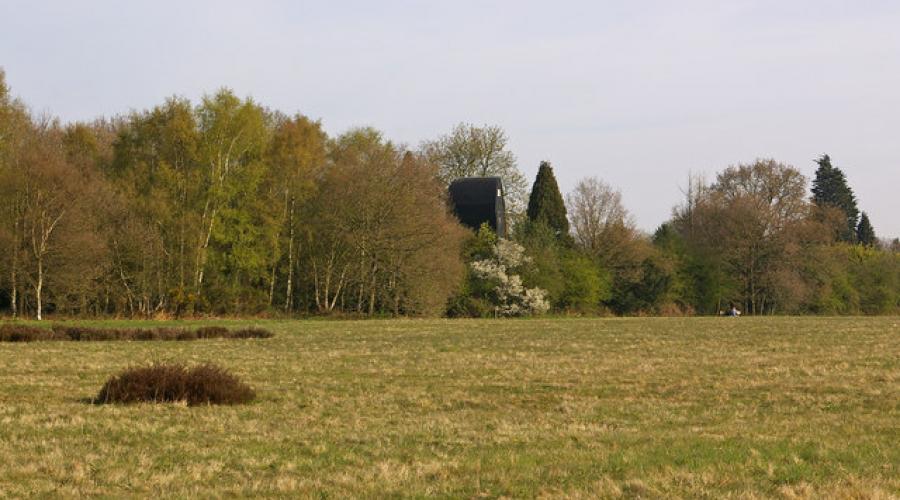 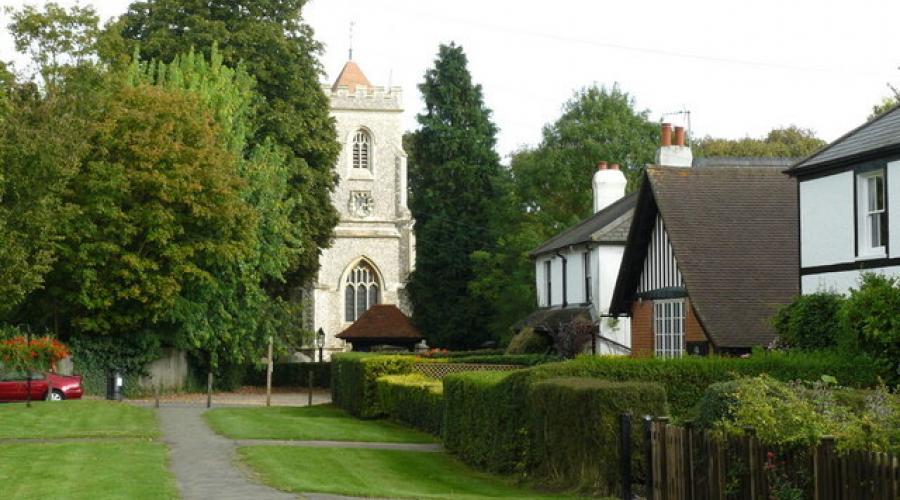 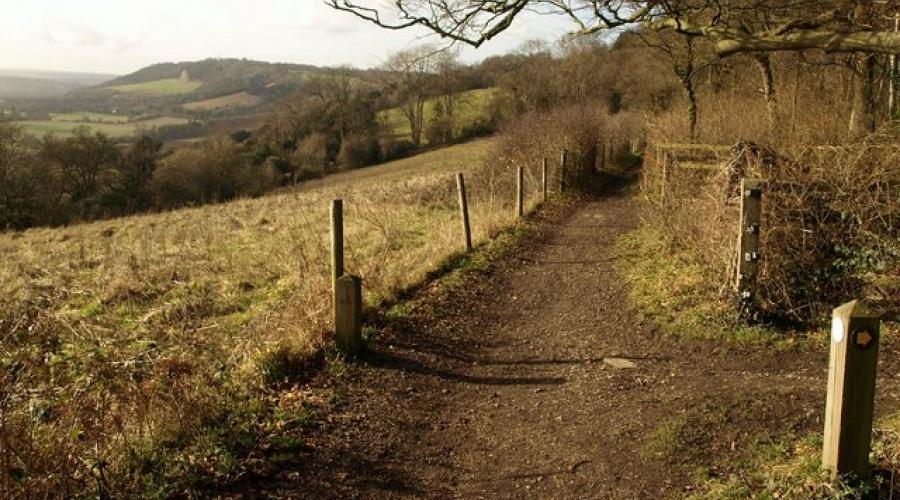 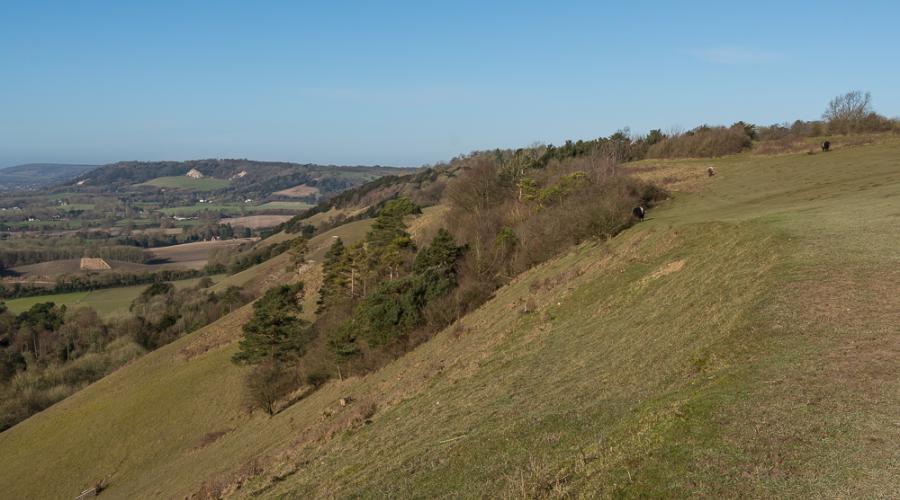 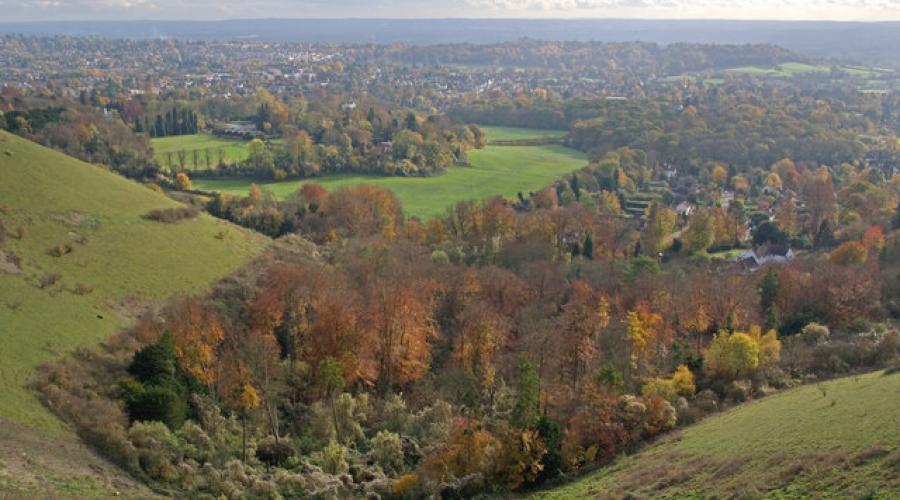 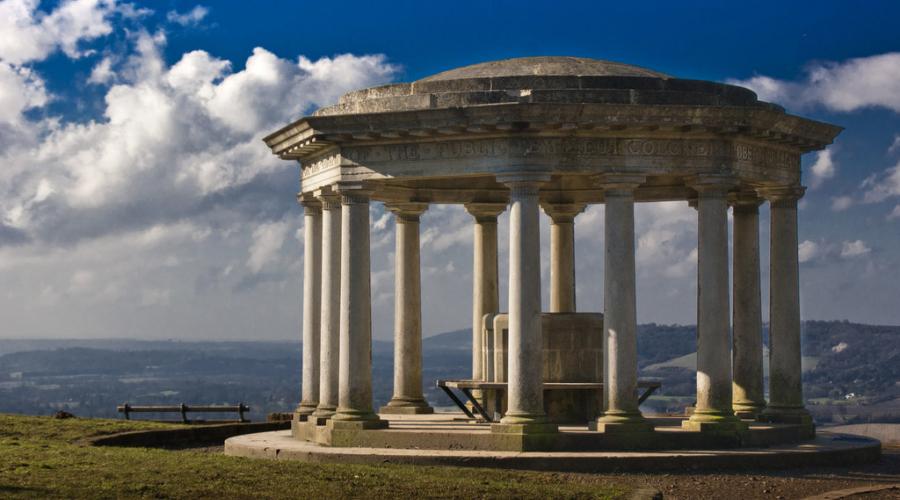 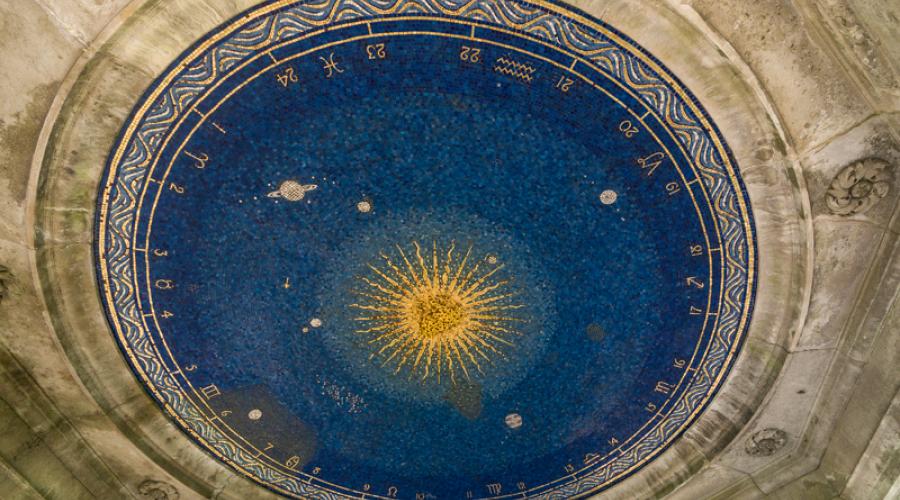 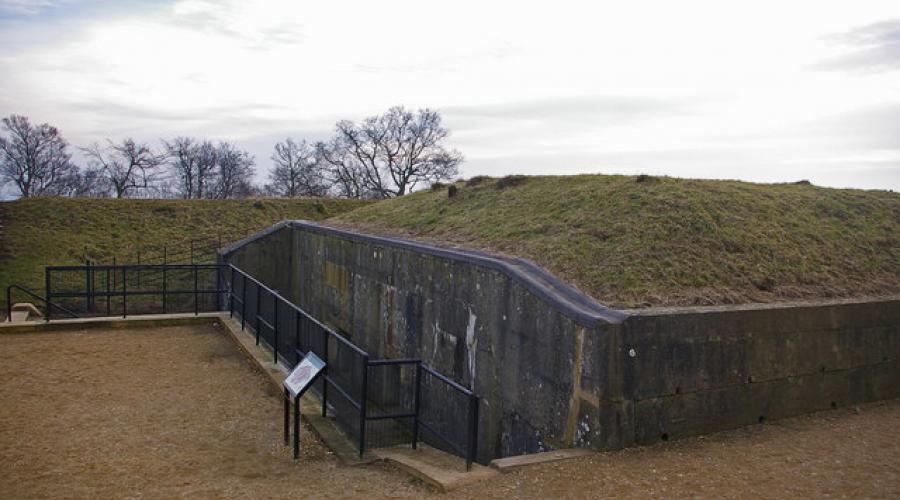 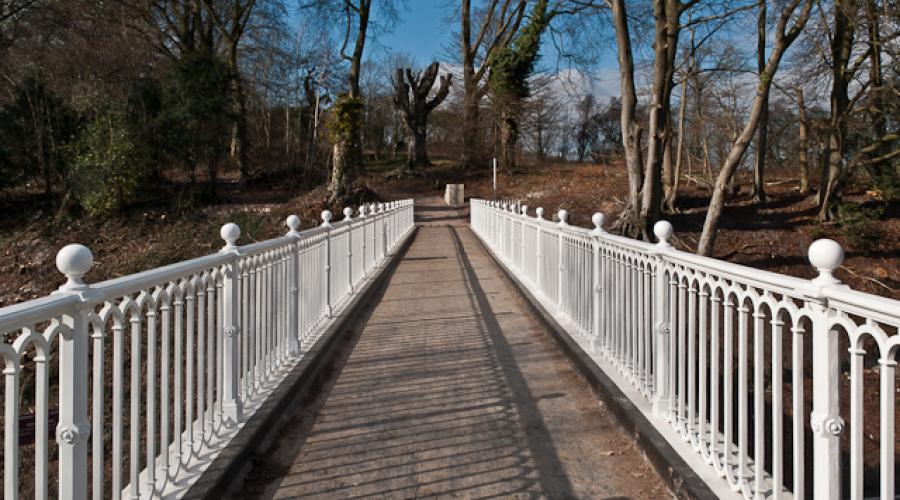 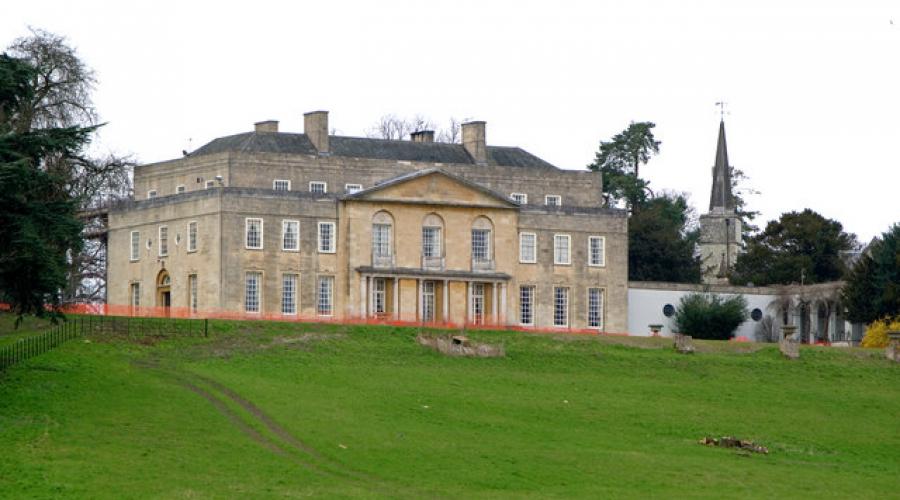 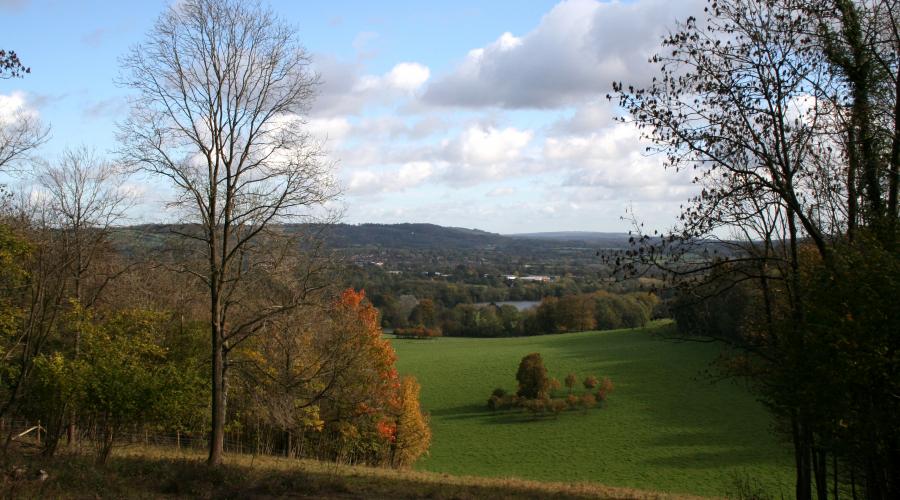 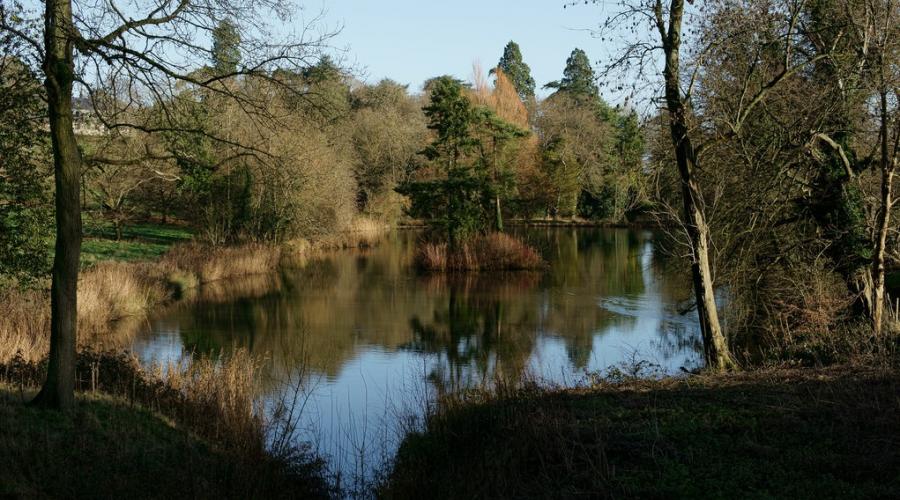 Walking boots with thick socks will be essential to cope with the climbing. Wear clothing appropriate to the weather including warm kit in case of cold weather and waterproof kit in case of rain. There shouldn't be too much mud as much of the North Downs Way is gravel and we'll be on tarmac lanes and well-drained heaths and downs.

Please bring a packed lunch and lots to drink. We could have a drink at lunchtime at The Blue Ball in Walton-on-the-Hill and in the cafe near Reigate fort at 16.00.